You don’t have to like cricket or have cable TV to know who Christopher Barnwell is after his stellar performance at the recently concluded Caribbean T20 competition. From obtaining 245 runs making him the lead scorer in the competition, to acquiring six wickets displaying an excellent performance in the field, Christopher Barnwell has established himself as one of the Caribbean’s finest cricketers.

MagLYFE was afforded the opportunity to sit and chitchat with this phenomenal young man at this home turf, the Demerara Cricket Club.

CHRISTOPHER BARNWELL (CB): Christopher Barnwell is a 26 year old young man who loves to play sports and enjoys being surrounded by family and friends. “I’m a very responsible and humble individual.”

ML: What is one thing you absolutely love (besides cricket)? 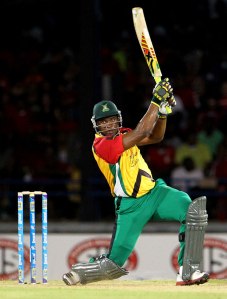 CB: One thing I absolutely love besides cricket is Football.

ML: Before we get to talking about the competition, I know many persons would want to know why cricket? And how has cricket changed your life?

CB: Cricket was always my second favourite sport. But I wanted to play and make the West Indies team since my late uncle Andrew Lyght Snr didn’t make it. Cricket has made me more responsible, humble and independent.

ML: In 2011, the call to play for the West Indies came and you were given the opportunity to tour with them. What did that mean to you and how has it paved the way for now?

CB: It meant the world to me because I was finally achieving a goal I had set since age 14. It has paved the way for now, whereby once I perform well at the regional level I am making myself more visible to the selectors.

ML: You were a beast in that semi-final game against Jamaica, tell us about preparation? What were you thinking during your performance and after?

CB: Preparation wasn’t much since everyone knew that we played back-to-back games; so we didn’t train tremendously for those couple of days.  During my performance all I was thinking about was making runs. I wanted to develop a partnership with my fellow teammate Trevon Griffith and bring Guyana into the game, pick up the singles and put away bad balls. After the game all I was thinking about was going back to the hotel and resting.

ML: You were compared to the likes of Chris Gayle? How does that feel?

CB: Being compared to Chris Gayle was amazing since he is one of my favourite cricketers, but at the end of it all Chris Gayle is Chris Gayle (he says with a laugh).

ML: One of the best things about the competition was & one of the worst things…

CB: The best thing for me was making it to the finals and the worst was the team not being able to deliver on that day.

ML: All in a day’s work…what does a day of preparation for T20 entail from sun up to sun down?

CB: Intense training, relaxation of the mind and little bit of fun with teammates.

ML: Do you have a pre-game ritual?

CB: Pre-game ritual, I just try to have some alone time in my room before games and I always say a short prayer.

ML: How nervous are you before a game usually?

CB: I’m not usually nervous, I go out there and I try to do my best and what is expected of me depending on the position the team is in.

ML: What is the most positive thing you learnt from this competition?

ML: If you weren’t a cricketer, you would have been a …

ML: Who inspires you? (Cricketer or otherwise)

CB: My mother inspires me.

ML: Who is your favourite cricketer and why?

CB: My favourite cricketer is Dwayne Bravo, because he’s an all-rounder and he always delivers in the game, whether it’s with the bat, ball or in the field. He has a very lively spirit, something one needs in the field to keep them going.

ML: Jumping seems to be the best way for you to celebrate victories, tell us why?

CB: (He laughs) … well it’s not really a planned celebration; it’s just the adrenaline at the moment.

ML: You’re a role model and a sports ambassador, what advice do you have for young men looking to follow in your path?

CB: I would advise them to stay in school and do not give up on their dreams or goals because things may not happen when we want it to but they do at the right time.

CB: That was to be making the West Indies One Day International (ODI) and Test Teams and maintaining my position until I’m ready to retire.

ML: I just have to ask and I’m positive the ladies would want to know the answer to this question as well: is Christopher Barnwell single, taken or married?

1. He played Basketball and Table Tennis in high school.

2. He played Football for Pele Football Club before turning to cricket.

3. He started as a spin bowler when he debuted as a cricketer.

4. He doesn’t leave his bed in the mornings without saying a prayer.

The photos in this article were all provided by Christopher Barnwell.